Voltorb (ビリリダマ, Voltorb Biriridama in original Japanese language versions) is one of 493 fictional species of the Pokémon franchise. Voltorb is a conjunction of volt, a measure used in electricity studies, and orb, a reference to its spherical shape. Its original Japanese name comes from two sources. "Dama" is derived from "tama", meaning "ball" or "sphere". "Biriri" comes from "biri biri", an onomatopoeic word describing the prickling sensation of an electric shock. Oddly enough, despite being Electric-type Pokémon, neither Voltorb nor its evolved form, Electrode, learn any Electric attacks naturally until Generation III.

Voltorb looks remarkably like a Poké Ball in shape and coloration. It is a red-and-white small sphere which has eyes on the red part.

The most peculiar thing about the Voltorb species is its origins, which are not fully understood. The first reported appearance of a Voltorb was near a factory which made Poké Balls, shortly after the introduction of modern Poké Balls to the market. Voltorbs were later found in other places, such as power plants and electric train tracks, from where they draw power.

Since its appearance is so similar to that of a standard Poké Ball, it is theorized that Voltorbs are somehow derived from Poké Balls. Some believe that a Voltorb is created when a Poké Ball is exposed to a powerful pulse of energy. Voltorb's similarity to a Poké Ball makes it easily mistaken for the latter, and there are many who have been zapped by a Voltorb thought to be a Poké Ball. Voltorb's components are not found in the wild, which emphasizes its artificial nature, and even the wild now.

A Voltorb's attitude seems to be rather volatile - it can and will Self-Destruct with very little notice. Even the slightest stimulus, such as a bump it encounters while rolling along, may cause it to explode. For this reason, everyone dealing with Voltorbs in any way exercises extreme caution in their handling.

It is also interesting to note that the original Pokéballs exploded after usage so they could not be used again, unlike in the anime. This may be a reason why Voltorb's and its evolved form Electrode's signature attacks are Self-Destruct and Explosion (both of which cause the Pokémon using it to lose all its energy). This evolution occurs once a Voltorb reaches level 30. However in Pokémon FireRed and LeafGreen, it is possible to trade Raichu for Electrode, in the Pokémon Lab on Cinnabar Island. A player can catch a lvl.3 Pikachu in Viridian forest, evolve it through use of thunderstone, and trade this lvl.3 raichu, resulting in a lvl.3 electrode.

They are often found near power plants. They are also seen in towns sometimes, rolling along power cables.

In Pokémon Red, Blue, Yellow, FireRed and LeafGreen, Voltorb can be found in the Power Plant. Some are disguised as item-bearing Poké Balls on the game screen, making them the pokémon equivalent of the treasure chest monsters seen in other RPGs.

In Pokémon Gold, Silver and Crystal, Voltorb are found in Team Rocket's underground base in Mahogany Town and in Route 10.

In Pokémon Ruby, Sapphire and Emerald, Voltorb can be found around and inside New Mauville. Again, some are disguised as Poké Balls.

In Pokémon XD one can be snagged from Wanderer Miror B.

Voltorb's speed is excellent, but the rest of its statistics, including its special attack, are not very good. Its evolved form, Electrode is used in its place.

Since Voltorb have no gender, they cannot breed in the game without a Ditto.

In the Nintendo 64 game, Pokémon Stadium, Voltorb can be used in the mini game Thundering Dynamo. However, there's a 50/50 chance between using either Pikachu or Voltorb. The object of the game is to tap A when the light turns blue, B when it turns green, and if the player reaches full electric charge, then their Pokémon will zap the other three users.

Voltorb have made a number of appearances, which are mostly cameos. Their role is usually to appear, get agitated by something, and self-destruct, with various consequences. The ninja Gym Leader Koga uses exploding Voltorbs like smoke bombs in episode #32 (The Ninja Poké-Showdown).

Voltorb's most prominent appearance can be said to be in episode #116 (The Underground Round-Up), where a Voltorb belonging to a Diglett rancher named Poncho befriends Misty's Togepi and helps some Electrode escape from Team Rocket agents Jessie, James and Meowth.

A popular comedy sequence is the red Pokémon trainer Ash Ketchum looking for a Pokéball and finding a Voltorb and getting shocked (similar to his reaction with Pikachu).

Voltorb is a Pokémon that looks just like a Pokéball, even in its height. It debuts in the Red, Green & Blue chapter in its own round, Danger: High Voltorb. Here, Red tries to touch one abord the S.S. Anne thinking that is only a PokéBall, but is zapped by it. 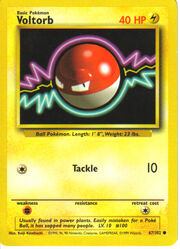 Voltorb has appeared many times on the Pokémon Trading Card Game.