Vulpix (ロコン, Rokon in original Japanese language versions) is one of the original 150 Pokémon. It was available for catching in the wild in Pokémon Blue only. It is a Fire-type multi-tailed fox Pokémon. It was originally known as the less creative name, "Foxfire", before the game was released.

Vulpix are fox-like creatures with six curled tails, based on the Japanese fox spirit kitsune. Most commonly female, Vulpix are especially known for being beautiful. As Vulpix undergo Pokémon evolution, their red fur turns pale yellow and they grow three extra tails.

Vulpix are a prominent species, since Brock owns one throughout much first series of the Pokémon anime.

Its Japanese name, Rokon is a portmanteau of six (六, roku) and kon (from kon kon, an onomatopoeic word describing the bark of a fox), or an alternate reading of the Japanese word for kitsune (狐, kitsune), meaning fox - in this case, the reading is ko (こ, ko).

The name Vulpix is a blend of the words vulpes or vulpine and six. Also, Vulpix's element most likely may have been derived from Vulcan, who was the god of fire, volcanoes and blacksmiths, in Roman mythology. In the English beta versions of the game, Vulpix was known as Foxfire, a combination of fire and fox.

When it is born, Vulpix has just one white tail but as Vulpix get older, this tail splits from its tip. Both its fur and tails are beautiful; as it grows larger, its coat grows even thicker and more luxurious. Inside Vulpix's body is supposedly a flame that burns and never goes out. During the daytime, when the temperature rises, this Pokémon releases flames from its mouth to prevent its body from getting too hot.

If attacked by an enemy stronger than itself, it feigns injury to fool the enemy, so that it can escape unharmed. It can freely control fire. Just before evolution, its six tails grow hot as if they are on fire. Vulpix is impervious to fire moves, as they also raise the power Vulpix's fire type attacks when struck. This is identified in the context of the games by Vulpix's ability, Flash Fire. The artwork design of Vulpix was created by Ken Sugimori in 1996.

Vulpix evolves into Ninetales after it has lived for one hundred years, so to evolve a Vulpix in the game, a Fire Stone must be used. However, as is common for Pokémon that evolve by use of a stone, doing this will prevent Vulpix from learning any new attacks on its own in Red, Blue, and Yellow. Instead, the player must make sure it has learned all the attacks they want it to know before evolving it.

Vulpix, in Pokémon Blue, lives abundantly in the ruins of Pokémon Mansion and along routes 7 and 8 but a trade must be negotiated in order to obtain Vulpix in Pokémon Red. It can also be purchased from the game corner in Pokémon Yellow. It is most common in Pokémon Silver, where it may be found on routes 7, 8, 36 and 37. Vulpix cannot be found in the wild in Gold or Crystal. In the Pokémon Ruby, Sapphire and Pokémon Emerald games, it can be found at the peak of Mt. Pyre. In Pokémon LeafGreen it can be found near Saffron City, and the Pokémon Mansion, although not quite as common. In Pokémon XD, one could be snagged from Cipher Peon Mesin.

Vulpix has average special attack, special defense and speed, but is weakest in terms of hit points and in the bottom 20% for attack and defense. As with most Pokémon who evolve with the use of elemental stones, Vulpix does not learn any additional moves after evolution on its own.

Vulpix are also found in the Nintendo 64 game Pokémon Snap in the Volcano Course.

In the Fourth Generation Vulpix can be found on Route 209 while the player has Pokemon Leafgreen inserted into the DS' GBA Slot.

Vulpix is found in the wild on Routes 7 and 8, and in the Cinnabar Mansion.

Vulpix cannot be caught in the wild in Red.

Vulpix can be found on Routes 36 and 37 in Silver. It is not available in the wild in Gold.

Vulpix cannot be found in this game and must be traded from the previous Game Boy games.

Vulpix can be found at Mt. Pyre.

Vulpix is found in the wild on Routes 7 and 8, and in the Pokémon Mansion on Cinnabar Island.

Vulpix cannot be caught in the wild in FireRed.

In the Pokémon anime, Brock, the former gym leader of Pewter City and traveling companion of Ash Ketchum, is given a Vulpix by a Pokémon breeder named Suzy in episode "Pokémon Fashion Flash" (from season 1), citing that he could take better care of her than she could, after which Vulpix became Brock's trademark Pokémon. She is voiced by Japanese voice actress, Rikako Aikawa and by Roxanne Beck in her debut and by Rachael Lillis all other appearances. Later in the series (in the episode "Beauty and the Breeder"), he gave Vulpix back to Suzy. This annoyed many fans, as Vulpix had quickly become Brock's Pokémon of choice, being powerful enough to take on Pikachu in one-on-one training. Vulpix had several fights through her time being with Brock, and was considered by many to be Brock's "Pikachu", her signature attack being Fire Spin.

In Pokémon Special, Flannery had a Vulpix.

In Pocket Monsters Emerald: Challenge!! Battle Frontier, the main character, Enta has a Vulpix that is his first Pokémon, as well as his most powerful and loyal. 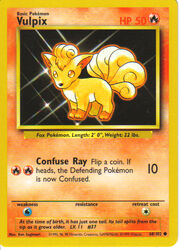 Vulpix in the Pokémon Trading Card Game.(Note the misprint of HP 50)

Vulpix has appeared in the Pokémon Trading Card Game in many sets including the base set. It also was found to be misprinted. Instead of saying 50 HP it said HP 50. It also appears in base set 2, in Gym Heroes/Gym Challenge set as Brock's Vulpix and Blaine's Vulpix. Also appears in Legendary Collection, Expedition Base Set, Aquapolis, EX: Hidden Legends, EX: Emereald, and Mysterious Treasures.