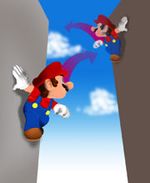 A Wall Jump is a technique featured in many platform, action-adventure, open-world and racing video games, in which the player jumps onto a wall and then quickly pushes back, either as a means of attack or to advance to higher areas

The basic example of a wall jump is that the player jumps into a wall or another vertical barrier of some kind and pushes off its surface in order to start another jump. The player is sometimes able to change directions after a wall jump, meaning the player character can direct him or herself into the wall again in order to repeatedly wall jump.

Games such as, Toy Story 3 and Jak & Daxter tell the player the technique to wall jump.