Warp Zones are special places in Super Mario Bros. that lead to different Worlds. They are essentially a level skip that allows Mario to skip two, six or ten different levels.

The first Warp Zone is in World 1-2, which warps to Worlds 2, 3 and 4. In order for Mario to get to the Warp Pipes, he has to go near the elevators near the end of the level and jump one of the platforms going up. Then, he must jump on to the ceiling and run across the blocks to find the Warp Zones.

The next Warp Zone is in World 4-2. Mario must go near the beginning of the level, where the seven ? Blocks are, and jump on to the elevator. Then, he must jump to the elevator going downward. Once again, Mario must quickly jump onto the ceiling and run across the blocks to get to the World 5 Warp Zone.

The Minus World[edit | edit source] 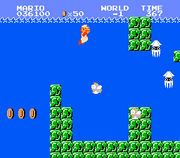 The Minus World is a glitch Warp Zone where it leads Mario to the infamous Minus World. In order for Mario to do this glitch, he must get to the end of World 1-2 where the exit pipe is. He must then jump on the pipe and smash the two blocks directly above of the lip of the pipe. Then Mario must get on the left edge of the pipe and jump backwards toward the block. If Mario does this correctly, he gets sucked through the wall and to the -1 Warp Zone. The two outside pipes takes him to World -1 and the middle pipe will takes Mario to World 5 meaning Mario has to do the first Warp Pipe seen.

Warp Zones were also in Super Mario Bros.: The Lost Levels. There are two backwards warps in that game being World 1 and World 5. An interesting approach was made in that game, because there was a different warp for each different World.

Super Mario Bros. 3 made an even more interesting approach. Instead of actual Warp Zones, they had what were called Warp Whistles.