Wartortle's name appears to be a blending of war with tortoise and turtle, forming "War-tor" which sounds like water. Kameil is derived from turtle (亀, kame) and mail, as in chain mail, or tail.

Wartortle is a bipedal, indigo-blue turtle with a brown shell and a long, furry tail and ears. It is more aggressive than Squirtle. It hides in water while hunting and emerges to surprise its prey, and is a tough Pokémon that often has scratches on its shell which serve as reminders of past battles. To maintain balance while swimming at high speeds, Wartortle moves its unusual furry ears and its tail. This tail, covered in rich, thick fur, is so long that it sticks out a bit even when Wartortle withdraws into its shell. It uses the fur to store air for extended underwater diving. It is a popular pet, as it is long-lived. Wartortle, and in particular its tail, is considered a symbol of longevity. As a Wartortle ages, algae may grow on its shell, and the color of its tail fur deepens. It is said that this Pokémon can live for up to 10,000 years. Like many Pokémon they have a tendency to become corrupted if mistreated. Corrupted, or Dark Wartortles often have negative attitudes and hide in their shells in a bad mood--which is often.

Wartortle is a water-type Pokémon that evolves from Squirtle at level 16 and evolves into Blastoise at level 36. Wartortle can only be obtained by evolving Squirtle, which do not appear in the wild, and are consequently quite rare and coveted.

Wartortle has overall average stats but excels in its defenses.

In Pokémon FireRed, LeafGreen, and Emerald, even normal (non-shiny) Wartortle are depicted with purplish skin instead of the normal blue/indigo color. No explanation has been given for this change, however, and Wartortle is still blue in the anime and official art.

In the Pokémon anime, the first Wartortle that appeared (in “Beach Blank-Out Blastoise”) ran into Ash and friends while seeking help for the leader of its tribe on the Island of Turtle Pokémon, a Blastoise which won’t wake up. (Ash eventually managed to awaken Blastoise by coaxing a Jigglypuff out of its water cannons.) Later, between Lilycove City and Mossdeep City, Ash and his Hoenn companions stop on an island and meet a student who has a Wartortle which eventually evolves into a Blastoise to free himself and, an Ivysaur and a Charmeleon from Team Rocket.

Wartortle and his evolutions specifically have moves and behavior in the anime that is directly linked to the movie monster Gamera. Their Rapid Spin technique is identical to Gamera's as they pull into their shell and fly, spinning like a flying saucer, through the air.

In the Pokémon Adventures manga, Green has a Wartortle when she meets (and cons) Red. It eventually evolves into a Blastoise, and Red later discovers that Wartortle evolved from a Squirtle she stole from Professor Oak. In Pokémon Getto da ze!, Shuu captures a Wartortle which has been harassing him with Water Gun and other such attacks. 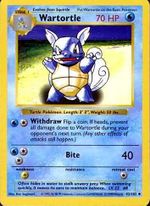 There are fewer Wartortle cards in the Pokémon Trading Card Game than Squirtle or Blastoise. It first appeared in Base Set (included in Base Set 2), then in Team Rocket (as Dark Wartortle, included in Legendary Collection), in Southern Islands, once in Expedition, and finally once in EX FireRed & LeafGreen. Blastoise is more famous by a wide margin, leaving Wartortle in its shadow.