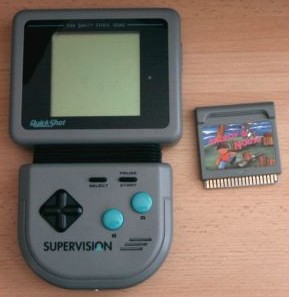 The Watara Supervision is a monochrome handheld game console, originating from Hong Kong, and introduced in 1992 as a cut-price competitor for Nintendo's Game Boy. It came packaged with a game called Crystball, which is similar to Breakout.

In the early 1990s it was once offered as a final prize on the television show Legends of the Hidden Temple.