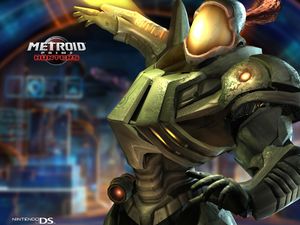 Weavel is a character from the Metroid universe. He first appears in Metroid Prime: Hunters.

Weavel was once a powerful Space Pirate General, before he was critically wounded during an altercation between the Space Pirates and Samus Aran in the Pirate base Brinstar. With just his brain and spinal cord still functional, his only hope for survival was an experimental procedure in which his body was fused with a mobile life support system.

With his suit, Weavel regained his mobility and became powerful, deadly, and almost unstoppable. Like many other of the galaxy's most dangeroud bounty hunters, Weavel is heading to the Tetra System to search for an ultimate weapon. However, nobody knows if Weavel seeks this object to increase the strength and power of the Space Pirates, or if he wants to betray the Pirates and keep the weapon for himself.

Weavel's second mode detaches his lower body from his torso, giving half his HP to each part. His lower half becomes a stationary turret, that will blast at enemies it can see coming. The upper half walks on Weavel's two arms, and can fit into small crawlspaces like Samus's Morph Ball. It's only attack is a slicing jumping attack that is harder to aim than a normal blast.