Weedle (ビードル, Bīdoru?, Beedle in original Japanese language versions) is one of several fast-evolving bug Pokémon. Its name comes from worm/weevil + needle, and the Japanese name may be a combo of bee + needle. A weedle is golden-brown in color with a pink nose and are commonly found in forests. They are easily found in Viridian Forest in the Kanto region of the Pokémon games. It also has a poison stinger on its head and tail. Weedle also uses its extremely acute sense of smell to find the types of leaves it likes, avoiding those it dislikes. Shiny Weedle are a greenish-yellow. Weedle evolve into Kakuna, and then Beedrill.[1]

Weedle can be caught in Kanto and Johto, and is often one of the first Pokémon a trainer encounters in the wild in various games which take place there, such as the originals, Pokémon Red/Blue, and their enhanced remakes, Pokémon Fire Red/Leaf Green; however, it cannot be caught in Pokémon Yellow. Before the protagonist can enter Viridian Forest, an elderly man demonstrates Pokémon catching technique (albeit without properly weakening the Pokémon first) by capturing a Weedle. Weedle is found easily in Viridian Forest, and found in surrounding areas of it.

Weedle are often caught by trainers beginning their Pokémon journey. Although Weedle are quite weak and only know Poison Sting and String Shot (making Weedle the only existing Pokémon that can't learn any Normal-type moves), they quickly evolve into Kakuna and then into Beedrill, which are fast, powerful physical attackers.

Bug types like Caterpie were originally susceptible to Poison attacks. This gave Weedle the upper hand against Caterpie, and, combined with Beedrill's speed, gave Beedrill a slight advantage in confrontations with Butterfree, until the Poison weakness of the Bug type was removed in the second generation of games. However, since Butterfree can learn Psychic and Flying-type attacks, it now has a distinct edge when facing combination Poison- and Bug-types such as Beedrill.

A Weedle appeared in Chapter 39, "Just A Spearow Carrier", of Pokémon Adventures, a manga series based on the Japanese versions of the video games, owned by the female Pallet Town trainer, Green. While at the Pokémon League, Red, the first main character based on the protagonist of the original games, saw Green attempting to trade her Weedle for a Butterfree, belong to a minor recurring character Fisherman Wilton. However Red stopped the trade, informing Wilton that the trade was unfair, much to Green's annoyance.[2] 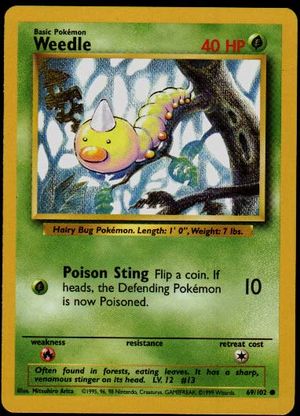 The Pokémon Trading Card Game is a collectible card game similar in goal to a Pokémon battle in the video game series; players must use cards (with individual strengths and weaknesses) in an attempt to defeat their opponent by "knocking out" all of his cards.[3] The game was first published in North America by Wizards of the Coast in 1999, until Nintendo USA started publishing the series in 2003.[4] Most Weedle cards are typical, Basic Pokémon cards, and are primarily used to play stronger cards (such as Stage-1 Pokémon, like Raichu, or Stage-2 Pokémon, like Charizard).[5] Weedle first appeared in the Pokémon Trading Card Game in the very first set of cards, the Base Set (included in Base Set 2 and the Legendary Collection). It has also appeared on cards from Gym Challenge (as Koga’s Weedle), Neo Discovery, Skyridge (appears twice), EX FireRed & LeafGreen, and EX Delta Species.[6]