Weepinbell is listed as Pokémon #70 in the Pokédex. Its name originates from "bell" (referring to its pre-evolved form, Bellsprout), and "weeping", a word that is often used in nomenclature of plants that bend over, such as Weeping Willow. It may be of interest to know that its Japanese name "utsudon" is likely inspired by the word "utsubokazura", the Japanese word for the pitcher plant.

Weepinbell immobilizes its enemies by using Poisonpowder and Acid. It will swallow anything that moves and digest it within its stomach, and produces a neutralizing fluid to keep from being affected by its own strong stomach acids. If its prey is larger than it, it will first use sharp leaves to slice it up before eating. Weepinbell uses the large hook on its rear end to hang on to tree branches and vines.

Weepinbell looks a lot like a Bellsprout, but without the vines and leaves. Instead, it likes to hop along.

Weepinbell can be evolved from a level 21 Bellsprout, or caught in some locations in the wild in LeafGreen. If Weepinbell is given a Leaf stone, it will evolve into Victreebel. In the Pokémon Blue version it is found on routes 12, 13, 14, 15 (it is not found in the Red version.) In the Yellow version it found in every place that it's found in the blue version, as well as the Cerulean Cave. In the Gold and Silver versions it is found on routes 44 & 24.

In Pokémon XD: Gale of Darkness, Weepinbell is one of the Shadow Pokémon you can snag from Cipher.

A Weepinbell is also found in the Nintendo 64 game Pokémon Snap in the Cave Course. It will be circling around a small puddle of water, and a clear photograph can be taken. If the Weepinbell is knocked into the pond by Pokémon food or a Pester Ball, it will evolve into Victreebel, which can also be photographed.

Weepinbell is also encountered in Pokémon Ranger, and in the wild, can swallow the protagonist whole, knocking him/her back to the beginning of the area.

In the Pokémon TV series, it was used by the character James briefly, but then it became a Victreebel. James would later trade Victreebel for another Weepinbell, which promptly evolved into yet another Victreebel. There are only 2 other times it got the spotlight in the Pokémon series. One was in the Pokémon School episode when a trainer let it out during a battle and it was surprisingly wiped out by Misty's Starmie, although it was a Grass-type, which is supposed to be stronger than Water types like Starmie. The other time was in the episode when Ash battled gym leader Erika. In that episode Erika let out her Weepinbell and Ash's Charmander defeated it. Because Weepinbell has made so few appearances, it is often referred to as one of the most neglected Pokémon. 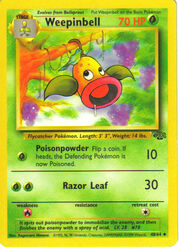 Weepinbell first appeared in the Pokémon Trading Card Game in the Jungle series. Describing the picture at the top of the page, in "information" it states that Weepinbell will eat anything that moves by using poisonpowder, Weepinbell is disguised as a normal plant and a if bird lands on it, Weepinbell will most likely use poison powder and eat the bird. It's obvious because weepinbell is eyeing the bird (which, oddly, doesn't resemble any Pokémon) while drooling, and poisonpowder is one of its given attacks.