Weezing (マタドガス, Matadogasu, Matadogas in original Japanese language versions) is a Pokémon, the evolved form of Koffing. It appeared first in Pokémon Red and Blue.

Weezing is a spelling variant of wheezing. The Japanese name uses the English loanword "gas" (which is used by Japanese to refer to both gasoline and the state of matter), with the prefix "do" meaning "bad" or "poisonous", and also applies the prefix "mata" (roughly "more").

Weezing is formed when 2 Koffing bond together in a pool of poisonous gases and liquids. Weezing is a sponge for pollution, feeding on toxic fumes, germs and dust. Though they thrive in toxic waste and garbage dumps, most Weezing prefer to live in the area of active volcanoes because the volcanoes are constantly smoking. The gas it emits from its mouth and crater-like pores has a horrid and pungent odor. It is more solid and tough than Koffing, because unlike Koffing it is liquid-based and not gas-based. This allows it to use attacks such as Sludge. Weezing's appearance is opposite of Koffing's. It has a pessimistic look on its face and has fangs that protrude from the lower jaw. Weezing has two heads, one much smaller than the other. The markings underneath the mouth of the smaller head differ from that of both the larger head and of Koffing.

The 2 fused Koffing share their gases. The heads will inflate and deflate until the gases are shared and mixed. If problems occur in the gas-mixing process, the Weezing can explode. Weezing requires a strong hide in order to produce internal gases.

Despite the putrid source of its equally putrid gases, high-priced perfume can be made from Weezing's internal gases by heavily diluting them.

Humans are warned of Weezing's dangerously toxic gases and putrid stench by the skull-and-crossbones symbol on its hard layer of skin.

According to its fourth generation Pokédex entry, it is possible for three Koffings to fuse and create a Weezing.

Koffing evolves into Weezing at level 35, and Weezing is also seen in the wild occasionally.

Weezing was considered one of the more useful Poison Type of the First Generation (Red/Blue/Yellow games) thanks mostly to its high defense rating. With the introduction of Pokémon Abilities (special traits that each Pokémon possess) in the Third Generation, Weezing lost its weakness to Ground Pokémon thanks to its ability Levitate. This leaves Weezing with a weakness to onlyPsychic-types.

There is a 5% chance of encountering a wild Weezing holding the item Smoke Ball when it is encountered in games made from the Second Generation onwards.

An alternate colour (or "shiny") Weezing is light blue in color, rather than purple.

In the GameCube video game Super Smash Bros. Melee, it can appear when a Poké Ball is thrown, and when it does it emits a cloud of toxic gas that prevents players from escaping when it touches them. Weezing is also an unlockable trophy.

James' Weezing evolved from a Koffing early on in the series. One of its key uses is its ability to blanket the area in smoke. This was utilized many times by Team Rocket in an effort to steal Pikachu under the cover of the smoke. In the episode A Poached Ego, James released Weezing (along with Jessie's Arbok) to defend an unevolved herd of Ekans and Koffing from a Pokémon poacher.

In the English dub of the anime, Weezing was voiced by Eric Stuart.

In Pokemon Special, both Koga and his daughter, Janine, have Weezing as a part of their arsenals. 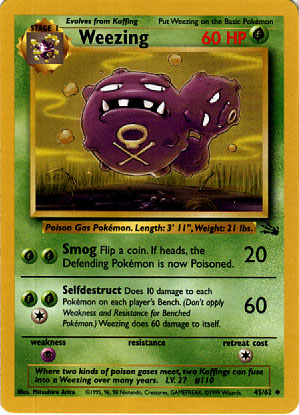 Weezing has made some appearances in the Pokémon Trading Card Game, all as Basic Pokémon: