Wigglytuff (プクリン, Pukurin in original Japanese language versions) is one of the fictional species of Pokémon in the Pokémon franchise, and evolves from the popular Pokémon Jigglypuff.

The name, Wigglytuff is a portmanteau of wiggly and tuff, which could be a deliberate misspelling of tough or tuft. Its Japanese name may come from purin (プリン, purin), the Japanese word for pudding, as well as a combination of many Japanese words; pikupikuugoku (ぴくぴく動く, pikupikuugoku), meaning to wiggle; fukureru (膨れる, fukureru), meaning to swell or expand; fukafukashita (ふかふかした, fukafukashita), meaning soft or fluffy; fūsen (風船, fūsen), meaning balloon; and mari (鞠, mari), meaning ball. Essentially, it could be taken to mean "a wiggly, soft and fluffy ball," "a swelling balloon," or a combination of the two. It evolves from a Jigglypuff who in turn evolves from an Igglybuff.

Wigglytuff is a relatively large pink balloon-like thing with a white underbelly, large blue baby-like eyes, a pair of large rabbit ears, and a twisty tuft of pink hair on its forehead. In fact, it's remarkably similar to its pre-evolved form, Jigglypuff, except the ears have grown larger and it now maintains an "oval" shape. Wigglytuff's eyes are always covered by a thin layer of tears, so that if any dust gets into Wigglytuff’s eyes, it is quickly cried away.

Wigglytuff’s body is soft and full of elasticity, like blubber, allowing the Pokémon to breathe in air heavily to inflate itself to large sizes. This it does particularly when it is angered or threatened, and it inflates itself steadily and seemingly without end to both intimidate the offender and prepare itself to battle it. Since it is adept at attacking with a Body Slam, the opponent would do well to be complacent. However, once inflated, Wigglytuff can easily find itself bouncing like a lion, limiting its ability to battle. It also inflates to a monstrously large size to scare attackers.

Wigglytuff has a layer of supple fur on its body fine enough that it cannot be seen unless it is under a microscope. The fur has become a popular aspect of Wigglytuff on its own; it has been described as exquisitely pleasant and the ultimate in luxuriousness. People who have felt Wigglytuff’s fur have had a hard time stopping feeling it because it feels so heavenly. In fact, some people attest that sleeping next to a Wigglytuff is simply divine. Even the Pokémon find the fur irresistible; If two Wigglytuff are to snuggle together, they will not want to be separated.

Wigglytuff first appears in Pokémon Red and Blue, and is the final form in the Jigglypuff evolutionary line. It evolves from Jigglypuff by means of an evolutionary stone, which shares a pre-evolution known as Igglybuff.

A Wigglytuff appears in English episode 69 (Lights, Camera, Quacktion!), in which Wigglytuff is a Pokémon actress with a terrible temper reminiscent of her pre-evolved form, Jigglypuff. It would usually Doubleslap characters. When Jessie's Arbok, James' Weezing, and Meowth audition for a movie lacking Pokémon actors, Wigglytuff slaps all of them for upstaging her. She ends up co-starring with Misty's Psyduck, and the two eventually "fall in love".

There is also a Wigglytuff in Pokémon: The First Movie (Mewtwo Strikes Back). One of the trainers brings a Wigglytuff to Mewtwo's Island Hideout, and through the plot a clone of that Wigglytuff is created by Mewtwo. Also, Harley, one of May's rivals, owns a Wigglytuff (This one, apparently has an inner evil nature).

A Wigglytuff is owned by Blue in Pokemon Special 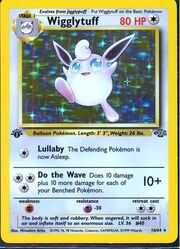 Stage 1 Colorless Wigglytuff can be found in the Jungle, Neo Destiny (as Light Wigglytuff), Neo Destiny (as Dark Wigglytuff). Pokémon VS* (as Whitney's Wigglytuff, a basic Pokémon), Skyridge, EX Hidden Legends (as Wigglytuff EX), EX Firered and Leafgreen, and EX Crystal Guardians sets in the Pokémon Trading Card Game. Jungle Wigglytuff is known for its Do the Wave attack, which increases its damage based on the number of benched Pokémon on the player's side. Wigglytuff EX holds a stronger version of this attack.

WNEW-TV in New York reported that a Wigglytuff balloon was slated to be part of the annual Macy's Thanksgiving Day Parade in 2006. Macy's was planning a stuffed Wigglytuff to be part of their Christmas stuffed animal sale that year, and it was expected to be a top seller.