The Wii U (codenamed Project Café) is the name for Nintendo's video game console and successor to the Wii. The system was released on November 18, 2012 in North America, November 30 in Europe and Australia, and December 8 in Japan and was unveiled during Nintendo's Press Conference at E3 2011 on June 7, 2011.

The Wii U features a new controller which can continue gameplay even when the TV is off. It is backwards-compatible with all Wii games and controllers and will also feature motion control, along with video chat. The Wii U is not backwards-compatible with GameCube optical discs. The Wii U was sold in 2 editions: The Basic edition was white, and came with 8 GiB of internal flash memory; the Premium edition was black, came with 32 GiB of internal flash memory, and also came with a Wii Sensor Bar bundled.

Initial beliefs about the Wii's successor that the new console would be an enhanced version named the "Wii HD". Many journalists claimed that it would have a high-definition video output along with a Blu-ray Disc drive built in with a release sometime in 2011.However, Nintendo President Satoru Iwata later stated that he saw "no significant reason" to include HD into the Nintendo Wii and that such an addition would be better suited for a successor. Game designer Shigeru Miyamoto also expressed Nintendo's interest in working with HD graphics but clarified that the company is primarily focused on the gameplay experience. In October 2009, Miyamoto said that they had no concrete plans about a successor yet, but knew that the successor would possibly still feature motion controls and expects its interface to be "more compact" and cheaper. Iwata also mentioned that the Wii's successor might be 3D-compatible but concluded that the adoption rates of 3D televisions should increase to at least 30% first.

In 2010, Nintendo of America President Reggie Fils-Aime commented that he felt "confident the Wii home entertainment console has a very long life in front of it" and declared that a successor would not be launched in the near future. At the E3 2010 presentation, Iwata revealed to the BBC that they would begin announcing a new console once Nintendo ran "out of ideas with the current hardware and cannot give users any more meaningful surprises with the technology [they] have". Later, at an investors meeting, he disclosed that they were "of course studying and developing the next console to Wii", but they were simultaneously keeping its concepts secret because it was "really important for [his] business to positively surprise people." Reggie Fils-Aime commented in a CNN article and claimed that Nintendo's next home console will not likely feature stereoscopic 3D, based on what 3D technology Nintendo has experimented with.

In April 2011, an uncredited source indicated that Nintendo was planning on unveiling the successor to the Nintendo Wii during E3 2011, that would be capable of gameplay in HD resolutions and will be backward compatible with Wii software. It was also rumored that the console would feature an all new controller with a built in high-resolution screen.

The origin of the rumor for the codename (and many other details) was French technology publication 01net. 01net had previously revealed the technical specifications of Sony's PlayStation Vita before it was announced.Claims have been made that the new machine is significantly more powerful than the PlayStation 3 and Xbox 360. It is likely that the new console will feature resolutions as high as 1080p. However, many sources doubt that it will feature 3D graphics like Nintendo's latest handheld, the Nintendo 3DS. 01net also claims to know some of the technical specifications of the new console (translation from Develop): "CPU is custom IBM PowerPC with three cores, GPU should be an ATI from the R700 family, with a shader unit at version 4.1. RAM should be at least 512 MB."

According to Edge, THQ president Brian Farrell allegedly told investors: "We don't expect new hardware any time soon from either Microsoft or Sony. It's different on Nintendo – we'll let them announce their new hardware". Nintendo has not commented on the claims, saying only that "Nintendo does not comment on rumors or speculation."

In a recent interview with Gameblog.fr when asked about the existence of Project Café, Shigeru Miyamoto expressed that readers should not believe everything they read and that Nintendo is always working on new hardware; although some of which will never be seen. Since they never know what direction they'll go for their next console or when they will release it, they do not disclose that information publicly.

For weeks after the announcement speculation was rife with what Nintendo had in mind. At the beginning of May 2011, Swedish site Loading.se reported that the console's final name will be "Nintendo Feel." According to this article, the controller's touchscreen (and possibly the entire surface of the controller) will use haptic technology to allow players to feel in-game textures. The site also claims that the technology behind the Wii Vitality Sensor will become a key feature of Feel. The next day, Kotaku reported that Project Café will have 8 GB of flash-based memory on board, with the assumed purpose of storing game saves, and will have up to 25 GB of content on game discs using a Nintendo-proprietary format system based on that of Blu-ray Discs.

In early June, Nikkei issued a report confirming earlier rumors that the new console will feature a controller with a six inch touchscreen that will give tablet-like controls to games, as well as a rechargeable battery and a camera. The controller can also serve as a portable game machine. Nikkei says the system will be released in mid-2012. Just two days prior to Nintendo's E3 2011 press conference, Game Informer, which had previously referred to the console as "Nintendo HD," incorrectly speculated that the final name for the console may simply be Nintendo. Engadget reported that IBM told them that the processor is a 45 nm custom chip with "'a lot' of embedded DRAM". 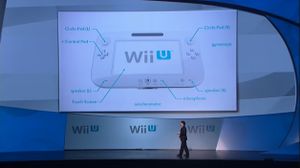 The Wii U controller's features as showcased at E3 2011.

On April 25, 2011, Nintendo released a statement officially announcing a system to succeed the Wii. They simultaneously announced that it would be released during 2012, and that playable console units would be present at E3 2011 (June 7–9). Speaking at an investor's conference, Nintendo CEO Satoru Iwata stated the Wii successor "will offer something new for home game systems." Iwata also confirmed that the successor to Wii will not launch in FY2012, meaning that it will release after April 2012.

A prototype version of Wii U was showcased at the E3 2011. The design of the console and controller were not definitive versions. Nintendo-published games that were confirmed are LEGO City Stories, a new Super Smash Bros. game,and a new Pikmin title. A list of third party titles was announced to be available at release, and were on show with video clips taken from PS3 and Xbox 360 versions. Nintendo also announced that on the holiday season of 2013, there will be a price decrease to $299.99 on the Premium version of the Wii U.

Nintendo released technical specifications of the Wii U hardware, noting that aspects are subject to change.