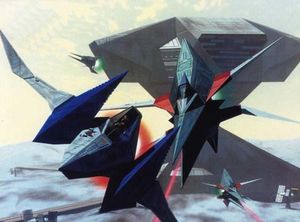 The one that looks like an X-Wing but isn't.

The Wolfen is the name the ship used by the Star Wolf team. It is their version of the Arwing. They differ from Arwings mostly in appearance. Wolfens are red with two more wings in an "X" pattern. It has three G-Diffusers (The glowing engine parts) as opposed to the Arwing's four.

Little was known about The Wolfen's capabilities until they became unlockable in Star Fox: Assault. The first Wolfen, appearing in Star Fox 64 (It was also included in the cancelled Star Fox 2), was a powerful ship, but unable to do evasive maneuvers like loops & U-turns. The Wolfen II that appears much later in the game has shields. It is also generally stronger and faster than the Arwing.

In Assault, the Wolfen fighter is a powerful ship that sacrfices maneuverability. The lasers are strong, but it cannot come to a complete stop, and is not as fast as Arwings.