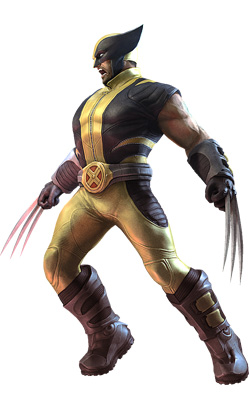 Wolverine, real name James "Logan" Howlett, is a character from the Marvel Comics member of the X-Men, a group of mutant superheroes.

Wolverine, Spider-Man, Iron Man, Captain America and Hulk are called by Adam Warlock to search for the Infinity Gems around the globe and stop Thanos. Doppelgängers of Wolverine appear as enemies.

Wolverine is the second character used by the player in the story. He fights against the alien invasion and goes to the Avengers Mansion. Inside the mansion he faces more aliens and Wink, which is stealing information from the Avengers computer. Wolverine defeats her, but she manages to escape. Later, Wolverine faces Brigade and is defeated.

Wolverine, Spider-Man, Captain America and Thor are called by Nick Fury in the beginning of the game to stop Doctor Doom's invasion to the S.H.I.E.L.D.'s Helicarrier. Wolverine is one of the playable heroes that fight against the Masters of Evil led by Doctor Doom. 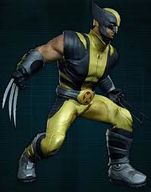 Underground, Logan, Spider-Man, Iceman, Hulk, and Invisible Woman go save Ms. Marvel from Shocker. They attack the Grim Reaper too. Then they stop Diamondback, Wizard and Scorcher.

At Washington D.C., there a attack by Titanium Man. Logan, Spider-Man, Bobby and Invisible Woman try to stop him. On the way they met Deadpool.

Logan and Cap are team is World War Two. So he is a pro-registration. 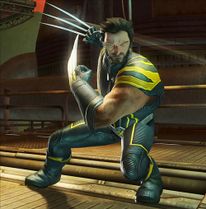