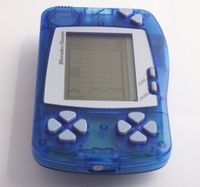 WonderSwan is a handheld game console released in Japan by Bandai in 1999. It was developed by the late Gunpei Yokoi's company Koto and Bandai. The WonderSwan was made to compete with the Neo Geo Pocket Color and the market leader Nintendo's Game Boy Color (even though the developer for the WonderSwan, Gunpei Yokoi, developed the original Nintendo Game Boy).

The WonderSwan was available in ten case colors, playable both vertically and horizontally, and features a fairly large library of games. As it was a console designed essentially for the Japanese market, most of the games are in Japanese, with only a few featuring English text.