Wooper (ウパー, Upā, Upah in original Japanese language versions) is one of the 493 fictional species of Pokémon creatures from the multi-billion-dollar[1] Pokémon media franchise – a collection of video games, anime, manga, books, trading cards and other media created by Satoshi Tajiri.

Wooper gets its name from Wooper Rooper (ウーパールーパー, ūpārūpā), the trademarked name used for the selling of axolotl salamander in Japan.

Wooper are light teal-colored Pokémon with round feet, no arms, and a long tail. Their simplistic face consists of mainly of a large mouth, primarily while open. They have no arms, though have pinkish barbed structures on the sides of their head. Three purple, though sometimes shaded blue or pink, gills are on its stomach.

Wooper is an axolotl-like Pokémon. They will usually live in cold water, however, they occasionally come out onto land in search of food. When doing so, they coat their bodies with slimy, poisonous film. Touching this barehandedly will cause a shooting pain. Male Wooper also have larger gills.

In Pokémon Gold and Silver, Wooper can be found on Route 32 at Night. In Pokémon Crystal, it can additionally be found in the Union Cave and outside the Ruins of Alph at Night.

Amusingly, Wooper can learn Dynamic Punch and Ice Punch, despite having no hands. (these attacks are done through Wooper's tail)

In Pokémon XD, Wooper can be caught in the Cave Pokéspot, though it is rare.

In Pokémon Diamond and Pearl, Wooper and Quagsire can both be caught in the Safari Zone. It can also be found on Route 212.

A number of Wooper have appeared at various points in the anime. Perhaps the most notable one is a friend of the Pichu Brothers. This Wooper is used as a fire extinguisher or a life-saving trampoline with its Water Gun when it's branches are squeezed.

Between Azalea Town and Goldenrod City, there is a preschool just for Wooper.

Many Wooper were some of the many Pokémon owned by the Marina Group. These Wooper preform like they almost always, seeming like they have symmetrical minds by always doing the same thing. One of their many tricks is by climbing up Jackie's arm and when all the Wooper are on his arm, Jackie would put his other arm to the ground so the Wooper could waddle down. A few Wooper were some of the Pokémon seen eating after the show was done.

Wooper appeared in chapter 92 of the Pokémon Adventures manga: "Vs. Hoothoot". In the chapter, a con-artist was using Wooper in a phony Pokémon catching game to rip off the inhabitants of New Bark Town.

In Volume 8 of Pokémon Special, a conman uses a swarm of Wooper as a part of his game stall. 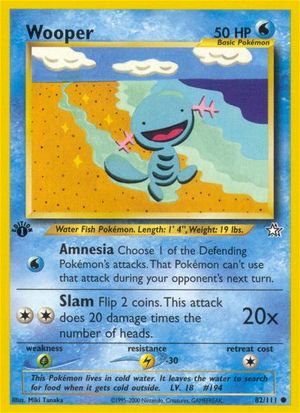 Wooper has appeared on five trading cards. It is a common water card in the Neo Genesis, Neo Discovery, Aquapolis, and EX Team Rocket Returns sets. There is also an additional uncommon Wooper card in the Aquapolis set.