when after the economical crisis of the cold war Russia wanted a way out. How did they do this, they black-mailed Europe. they threatened an invasion of Europe if they did not get the aid they needed. NATO treated this as a bluff, but as a precaution NATO started placing defences along the Iron Curtain.

Although the invasion of Europe and America never happened, World in Conflict shows what might of happened if the Russians had taken a violent way to stop the fall of the Soviet Union.

You play as Lieutenant Parker, later Captain, of the U.S. Regular Army. An info box is at the bottom

Russia demanded that Europe send aid to help Russia's economical crisis after the cold war. NATO began to prepare for a possible invasion by Russia. A few weeks later Russia invaded Europe, although NATO was preparing for this situation they did not expect an invasion on this scale. In a few weeks Germany fell and Russia pushed into France.

In France the main bulk of NATO's forces made a last stand in the country-side of France in a last chance effort NATO called in the help of America. 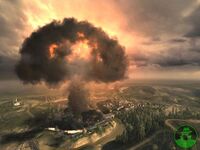 About 4 weeks after the invasion of Europe the Russians invaded America. First on their list was Seattle. It was easy for the Russians to capture Seattle as the American Guard was not ready for an attack on their home soil. within a few hours the whole of Seattle was occupied by the Russians.

About 4 weeks later the Americans made a last stand in Cascade Falls. The Americans made this last stand to stop the Russians from reach Fort Teller. If they do they will realise that the the Star Wars Project was never deployed and they might launch a nuclear attack with nuclear ballistic missiles. In the end the Americans have to drop a nuclear missile on Cascade Falls to stop the Russian advance. First you have to escape the area, but if all your forces leave the area at once the Russians will know something is up so Banon's company decide to stay behind and fight off the Russians until the Nuke arrives and he gets blown up as well.