Xatu is a bird with bright plumage and precognitive abilities. Xatu debuted in Nintendo games Pokémon Gold and Pokémon Silver in 2000. It is listed as the 178th Pokémon in the game's National Pokédex.[1]

The name Xatu could be derived from the same origins of its pre-evolved form, Natu. Xatu seems to have native patterns on its body, only with the letter "N" replaced with an "X" to symbolize something unknown and mysterious.[2] Its American name was originally going to be "Xoqo."[3]

Xatu's appearance resembles a bird. It has a colorful and elaborate plumage similar to a parrot. Its colors are influenced from ancient North and South American civilizations, such as the Maya, the Aztecs, and the Incas. It has two red eyes imprinted on its breast. In Pokémon Diamond and Pokémon Pearl, male Xatu have three yellow stripes along its lower area, while female Xatu only have two.[4]

Xatu possesses the power of precognition, rendering it able to see into the past and the future.[2] It often remains motionless for an entire day staring at the sun while it views the past and present or to meditate.[1] Xatu is said to be overwhelmed by the visual feedback of seeing two different time periods at once, or in terror at seeing the perils the future holds. In the game it is said that in some South American countries, Xatu is highly revered as a mystical Pokémon for its abilities.[2]

Xatu is a Psychic / Flying-type Pokémon.[2] This grants it immunity to Ground-type attacks, as well as resistance against Fighting-type Pokémon. It also has numerous weaknesses, including but not limited to, Dark-type and Electric-type Pokémon.

Xatu can evolve from Natu at level 25.[4] It is also found in the Safari Zone in Pokémon Ruby, Sapphire, and Emerald.[4] Xatu's statistics are average, with its speed and special attack being its highest attributes.[4] It learns numerous supporting abilities, such as Wish and Confuse Ray, and also learns offensive attacks, such as Psychic and Night Shade. It also learns Future Sight, which deals 80 Psychic-type damage to the opponent two turns later, befitting Xatu's precognitive ability.[5]

In Pokémon Mystery Dungeon, Xatu is a non-playable character. It warns the player of a human that turned into a Pokémon and caused natural disasters. Also, it speaks of "the unthinkable," referring to the end of the world.

The Pokémon anime series and films are a set of adventures separate from most other versions of Pokémon, featuring Ash Ketchum as the main character, and following his quest to become a Pokémon Master. He and his companions travel around the Pokémon world battling other Pokémon Trainers.

Xatu has had three appearances in the anime. In episode 236, "Xatu the Future," a Xatu was owned by a woman named Callista. Her Xatu predicted that a flood would sweep away the area that they were in, which it did later in the episode. Episode 352, "Me, Myself, and Time," features Xatu in the possession of a mysterious archaeologist. It battles Team Rocket's Cacnea, and defeats it. It appears again in episode 362, "Lights, Camerupt, Action," during a flashback May had about a movie she saw in her youth.

Xatu also makes a minor appearance in the fifth Pokémon movie, Pokémon Heroes, where it starts the Altomare canal race.

In Volume 14, Will uses a Xatu to fight Green and Silver.

By the events of the Battle Frontier saga, Crystal's Natu has evolved into a Xatu. 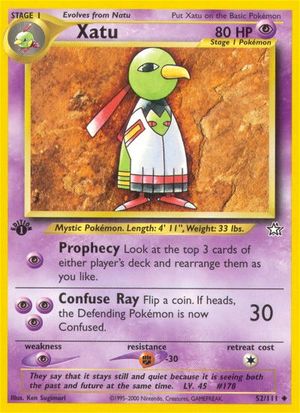 Xatu has appeared multiple times in the card game, nearly always as a Stage 1 and Psychic-type Pokémon. It appears in Neo Genesis,[7] Neo Discovery,[7] Skyridge,[7] Sandstorm,[7] EX Deoxys,[7] EX Unseen Forces,[7] and EX Dragon Frontiers.[7] Its EX Dragon Frontiers version was not a Psychic-type, and Xatu was released as Xatu δ, a Dark-type Pokémon.