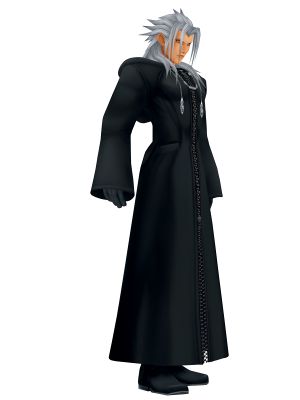 Xemnas is the Nobody of Xehanort. He is the leader of the Organization, and the main antagonist of Kingdom Hearts II. Xemnas is voiced by Norio Wakamoto in the Japanese version of Kingdom Hearts II, and by Paul St. Peter in the English version. His original self was named Xehanort, but prior to becoming a Nobody he took his master's name, Ansem. He controls Sorcerer Nobodies, and in battle he uses Aerial Blades and manipulates nothingness to phase through solid matter and manifest energy-based shields and projectiles. In Kingdom Hearts Final Mix, Xemnas appears as an optional boss in Hollow Bastion, called "Unknown". In Kingdom Hearts: Chain of Memories, he is infrequently spoken of by the members of the Organization, who refer to him only as the "Superior".

In Kingdom Hearts II, Xemnas initially appears in Roxas's dreams, as he struggles to remember what he is. Xemnas also makes two appearances at Hollow Bastion; in the second, his identity is clarified and his face revealed. His plan is explained as increasing the power of Kingdom Hearts by having Sora destroy Heartless, releasing the hearts inside them. Xemnas appears again, in the World That Never Was, when DiZ attempts to contain Kingdom Hearts's power with a device of his creation. However, DiZ's machine overloads and explodes, killing its creator, leaving a huge hole in Kingdom Hearts, and causing many of the hearts to rain down and become Heartless. Xemnas uses what is left of Kingdom Hearts's power to summon the emotions of rage and hatred and take on a new form to fight Sora's party. Though Xemnas is thought to be defeated, he manages to separate Sora and Riku from the others, and attacks them. However, the two defeat him, and he then fades into darkness.