Yanma (ヤンヤンマ, Yan'yanma, Yanyanma in original Japanese language versions) is one of the 649 fictional species of Pokémon from the Pokémon Franchise – a series of video games, anime, manga, books, trading cards and other media created by Satoshi Tajiri.

Yanma's name is an abbreviation of its Japanese name, Yanyanma, which is in turn dragonfly (蜻蜓, yanma) partially doubled.

Yanma physically resembles a dragonfly. It has a large green head on a long red thorax, six legs and two pairs of wings. Its head has a pair of segmented eyes and two red spikes on top.

Yanma has extremely well-developed wing muscles; in fact, they can generate enough force to break glass by means of the resulting shockwave. Although normally not inclined nor capable of moving much faster than a real world dragonfly, frightened Yanma have been recorded as breaking the sound barrier.

Its diet consists of non-Pokémon insects (such as mosquitos and moths); in this respect, a Yanma performs much the same role as an actual bat. Yanma is aided when hunting by its prodigious flying ability; it navigates so perfectly that it can abruptly change direction in mid-flight without slowing down.

It, interestingly is one of the only 6 bug-type Pokémon (excluding Wurmple, Caterpie and Weedle) to actually have 6 legs (though Skorupi does sport two stingers), the others being Paras, Ledyba, and all 3 of their evolved forms, Parasect, Ledian, and Yanmega.

Yanma's segmented eyes have a 360-degree field of vision. As a result, it is difficult to surprise, or escape from, a Yanma in the wild.

Yanma is a relatively rare Pokémon. In Pokémon Gold, Silver, and Crystal, it is commonly found in Route 35 only when it is swarming and the trainer there will phone the player. In Pokémon Colosseum, it is a Shadow Pokémon and can be Snagged in Pyrite Town's Battle Square. In Pokémon FireRed and LeafGreen, it is found in Ruin Valley. In Pokémon Diamond and Pearl, Yanma can be found rarely in the Great Marsh, the Safari-zone equivalent of past Pokémon games. Yanma also gets a new evolution known as Yanmega when it learns Ancient Power.

In "Pokémon Channel" it can be found in the players back yard under certain time and weather conditions.

Yanma is very fast and has decent Special Attack, but the rest of its stats are not particularly impressive. However, Yanma learns a handful of useful disrupting moves, such as Double Team, Supersonic and Detect. This can buy it time to lower the opponent's defense with Screech and attack with moves like Wing Attack and (from breeding) Signal Beam or Silver Wind.

Yanma is also notable for having two abiliries: Speed Boost increases Yanma's speed after every turn, while Compoundeyes increases the accuracy of Yanma's attacks by 30%. Compoundeyes allows Yanma to use inaccurate moves such as Supersonic and Hypnosis better than most Pokémon. In Pokémon Emerald, Compoundeyes also increases the rate of finding wild Pokémon with held items if its user is at the lead of the player’s party. If Yanma is taught the Thief move, it can then use it to steal the item without having to catch the Pokémon.

Yanma was featured in episode #179 (Wings and Things), where a boy called Zachary owned one which was constantly shattering windows around the city. In episode #290 (All in a day's Wurmple), a trainer named Forrester used a Yanma in Ash's first Double Battle (second counting the Orange Islands Season).

A trio of Yanma are accidentally let loose in Volume 12, causing minor chaos at Indigo Plateau. 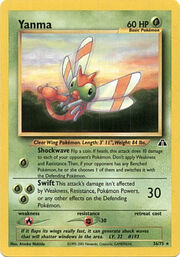 Yanma has made four appearances in the Pokémon Trading Card Game. It is a Basic Grass-type Pokémon in every case: