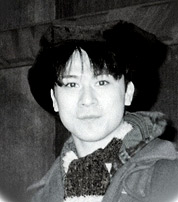 Yasunori Mitsuda (光田康典) is a Japanese video game music composer. He is probably best known for his work on the Chrono series, where he got his start. As the story goes, he was initially doing sound design on the project until he demanded that he get to compose. He eventually was allowed to produce most of the songs on Chrono Trigger, with the help of fellow composer Nobuo Uematsu. Some of his tracks include the fan favorite, "Frog's theme" and "Battle with Magus". Since then, he's worked on every Chrono game since, as well as music for other companies.