Yoot Saito's Odama is an innovative video game for the GameCube that fuses pinball mechanics and real-time tactics together to make a unique video game. It was created by game developer Yoot Saito. The game comes packaged with a GameCube microphone that was also included with Mario Party 6. Using the microphone, the player will tell his army where to go while at the same time controlling the flippers to hit the "Great Ball" to flatten the opposing army. 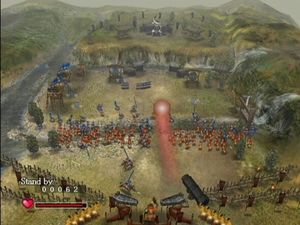 It's pinball, but it's also a strategy game. Brilliant!

The goal of this crazy game is to break down the enemy gates with the Odama while directing your soldiers to push a giant bell past enemies and through the now open gates.

The flippers are controlled with the L and R buttons on the GameCube Controller. Like any pinball game the flippers will whack the Odama back up the battlefield. The Odama can be knocked into enemies and other targets to destroy them, however if it hits your own men they to will perish.

Use of the GameCube Microphone is essential to directing soldiers actions. Holding down the X button on the GameCube controller activates the microphone allowing you to shout commands to your legion of loyal soldiers.