A term coined by The Legend of Zelda: The Ocarina of Time (OOT hereafter), in which the player presses the designated lock-on button (in OOT it was the Z button) to change the control scheme to make it easier to hit an opponent. While in normal control, Link moved much like Mario did in Mario 64. To quote Miyamoto, Mario controls "Like an RC car", moving in the direction the D-stick was tilted. However, this system works poorly in combat, as the enemies are moving too, making it difficult to hit them, especially with long range attacks that have to line up perfectly in on all 3 axes. Z-Targeting eliminated this problem by changing the control structure, so that the player was always facing the opponent no matter how they moved. Pressing left and right would cause Link to circle around the targeted object, like a circle strafe, and pressing forward and backwards would make him move closer to or further away from it. If the player moved far enough away or if Z was pressed again (or released, depending on the player's configuration) Navi would fly back to Link and the Z-Targeting would disengage, allowing the player to use with the standard controls once more. 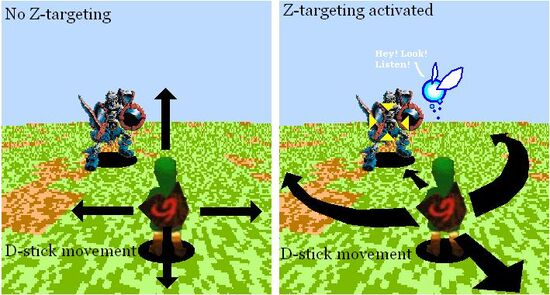 The system worked great, and has become a standard system for any game with real time 3D melee combat. In many games it also changes the jump function to a 'dodge' when D-stick is tilted to the left or right, a 'lunge' attack, when tilted forward and a back flip when tilted backwards. It's pretty much expected that any game with real-time 3D melee combat will copy the OOT control scheme.

Games that use Z-Targeting/Lock-on[edit | edit source]