From Codex Gamicus
(Redirected from ZAngband)
Jump to: navigation, search

Zangband (short for Zelazy Angband) is another variant of the roguelike game Angband. The latest stable version is 2.6.2, and the latest development versions are 2.7.x. Though it inherits Tolkienish elements from Angband, Zangband exists in order to borrow elements from the Amber universe of Roger Zelazny. It replaces Sauron with Oberon and Morgoth with the Serpent of Chaos.

A unique feature is that it replaces Angband's one town with a random overworld. As players progress through the game, they wander to farther towns to buy and sell better items. The entrance to the dungeon is always in the first town. 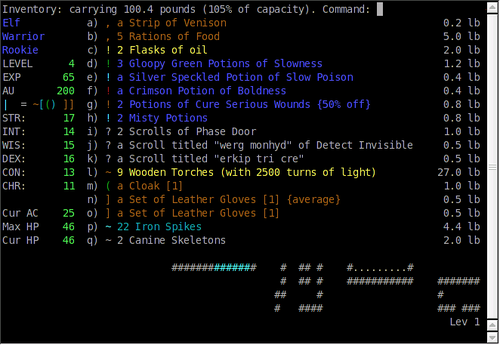 An example of a low-level player's inventory. 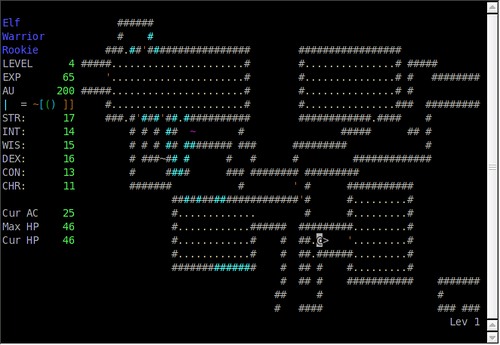 A screenshot of part of level 1 of the dungeon. The player is the highlighted @ next to the downward staircase >. After leaving this randomly-generated level, the player will not see it again. 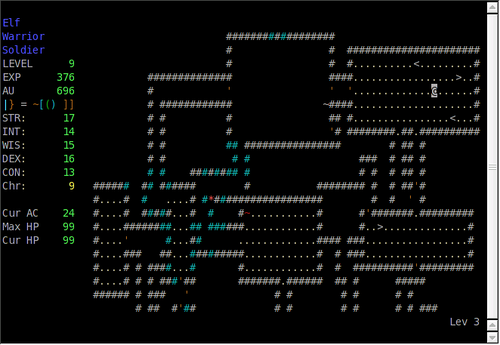 This room has three stairs in it. The room to the left has no dots because it is dark. This is a small level, so it scrolls up and down but not left and right. 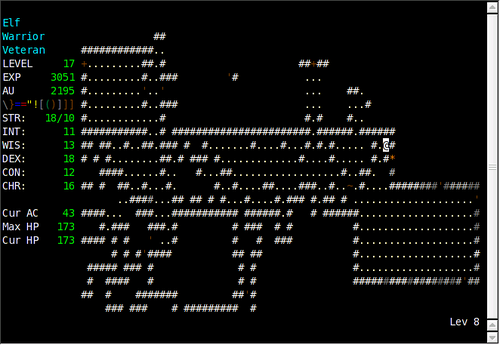 This hero has been tunneling through a vein in the dungeon and lighting the area with a common artifact, that Phial of Galadriel. The reward is this buried treasure (a red *) that the hero @ may dig out and retrieve.

There are official builds for Classic PowerPC and even 68k (at least 68020) Macs, long after most programmers stopped developing for them! There is also a Mac OS X build. You need StuffIt Expander to open any of the downloads.

The official binary requires at least a 386.