A member of the Twili, the people of the Shadow world, and the cause of the invasion of darkness swallowing Hyrule. 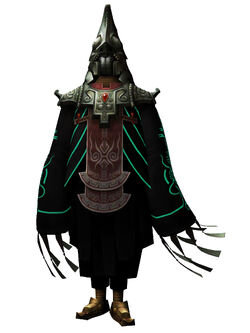 He laid a curse on the Twilight Princess, Midna, turning her into an imp. Once he usurped the throne, he turned the members of the Twili into shadow beasts, and then defeated the light spirits Faron, Eldin, and Lanayru. He converted the provinces of Hyrule to twilight.

After Link defeats Morpheel and gets the last piece of the Fused Shadow, he confronts Zant for the first time. He defeats Lanayru again and converts the area back to twilight. He attempts to stab Midna with a shadow crystal, however Link gets hit by the shadow crystal, keeping him in wolf form, even in the light world. Zant tries to convince Midna to join his conquest, however she refuses. Zant then forces her body into Lanayru's, causing her to become seriously ill. When Link gets to the end of the Twilight Palace, he confronts Zant, this time as a boss. After Link defeats him, Midna regains the pieces of the fused shadow and kills Zant with it. At the end of the game, Zant is seen snapping his neck right before Ganondorf dies.