Zapdos is a Pokémon that first appeared in Pokémon Red and Blue. It is one of the original legendary Pokémon, and one of the three Legendary Birds. According to the Pokédex, Zapdos creates huge bolts of lightning during storms, and appears only when a storm cloud splits in half. It gains power when natural bolts of lightning hit it while flying (though it doesn't have this ability in battle during the game).

Zapdos is more well known for being one of the Legendary Birds, and also for being the only one that's HARDCORE looking. Its name comes from zap and Spanish dos, meaning "two", indicating that it is the second of the three birds. Its Japanese name is 'Thunder' spelt phonetically, and its French name Electhor is from the words "Electricity" and "Thor", the Norse mythological god of Thunder. It appears as either a protagonist or an antagonist in games, anime or manga. Zapdos is based on the Native American Thunderbird.

Zapdos, one of a trio of magically powerful birds of which the other two are Articuno and Moltres, is the avian embodiment of spontaneous electricity. Zapdos, a creature that can freely manipulate electricity, is thought to live in thunderclouds, where it apparently only gains power when struck by lightning. It is seen emerging from clouds while dropping enormous lightning bolts, and even if it does not launch electricity its wings make peculiar crackling and snapping sounds as it flies.

Its anatomy seems fully capable of holding dangerously high amounts of voltage, which can be seen as reflected in its yellow, angular body and wings. Also behind its main yellow wings is a second pair of thinner, jet-black wings. Its beak is long and extremely sharp, and it allows it to use the devastating Flying- type attack Drill Peck. It is the only one of the winged mirages to learn this move.

Zapdos is a very strong Pokémon in the game. Zapdos is one of the three winged mirages. This is the Electric-type version. Zapdos also appears as both a boss and a playable character in Pokémon Mystery Dungeon.

As a Legendary Pokémon, Zapdos’ statistics are high all around, therefore making it a top tier Pokémon. Its unique Electric/Flying type abilities grant it immunity to the normally devastating Earthquake.

In Super Smash Bros. Melee, Zapdos can be released from a pokéball as an item and zaps everyone that is within range, except the person who released it. It is also an unlockable trophy.

Zapdos can be found inside the Power Plant. To reach the Power Plant, go to the Pokémon Center outside the entrance to Rock Tunnel on via Route 9 and 10. Go north of the patch of grass above the Pokémon Center and surf out into the water beyond the fence. Go east and south until you reach the shore. The Power Plant is there, hidden to a degree. Zapdos is difficult to catch, and you'd be wise to save your Master Ball for Mewtwo, so bring plenty of Ultra Balls.

When traded from the above versions to the Gold, Silver, and Crystal versions, Zapdos will be holding a Brightpowder item, which lowers the foes accuracy when held by a Pokémon.

Zapdos can again be found at the end of the Power Plant maze. Bring lots of Ultra Balls. A ditto really helps if you can get one seeing that it can transform into Zapdos and use it's thunder wave attack to paralyze it to make it easier to catch. Any other Pokémon that can paralyze another Pokémon or a Pokémon that can put another to sleep are also good.

A Zapdos is inside the egg at the Tunnel. To get it to catch, lure the Pikachu over to the egg by throwing apples. Then play the Poké Flute. Pikachu will Thundershock the egg, and Zapdos will hatch to let you take a photo.

You can snag and purify a Zapdos in XD during the final battle with Master Greevil. When purified, it knows Baton Pass, Metal Sound, and Extrasensory—all moves that Zapdos normally cannot learn.

With one of the best type combinations in the game, Zapdos is an Electric Pokémon with an immunity to Ground. With decent speed and great versatility when it comes to available moves, Zapdos is easily the absolute best of the Legendary Birds, outshining his sister Articuno and completely leaving Moltres in the dust.

Zapdos has lots of possible move sets. Thanks to Pokémon XD, Zapdos makes an excellent Baton Passer, passing Agility or Substitute to Pokémon who can take out its two weaknesses, Ice and Rock, but aren't well known for their speed or defense - Marowak comes to mind. Like Articuno Rest/Sleep Talk Zapdos can destroy teams in the hands of a good player.

No matter what kind of strategy you want to apply to your Zapdos, Thunder/Thunderbolt is an absolute must. In fact, it should be one of your maximum two attacking moves, since Zapdos' movepool is too good to let some of its support moves go to waste. If you're lucky, Hidden Power Grass can take care of the hopeful Rock/Ground type, or the dangerous Rock Sliding Swampert, who will kill Zapdos very fast if it doesn't have super effective move against it.

Zapdos appeared in the original Pokémon series as a giant robot in a theme park which was destroyed.

Zapdos is featured in Pokémon The Movie 2000 together with the other two winged mirages, Articuno and Moltres. It appears that Zapdos communicates through electricity as he shocks Pikachu to communicate.

Zapdos also appeared in the episode "As Clear as Crystal". Team Rocket wanted to steal a Crystal that heals Electric type Pokémon, they worshiped it like their leader. A Zapdos came by and Team Rocket attempted to steal both, but they were unsuccessful in doing so. In the ending, all the normal Electric Pokémon cheered and waved goodbye as it flew away like their king.

Zapdos has a cameo appearance in Pokémon Ranger and the Temple of the Sea.

In the Manga[edit | edit source]

Zapdos is featured in Pokémon Adventures in Chapter 26, it was captured by LT. Surge (Gym leader from Vermillion City) like the other two winged mirages to keep their heroes away for their Team Rocket's boss' plans. 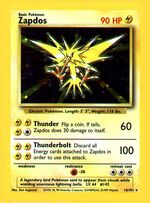 Most Zapdos cards are rare and Basic Pokémon cards. The majority are holofoil. Zapdos has made many appearances in the Pokémon Trading Card Game, including the Base Set (included in Base Set 2 and Legendary) and expansions including Fossil and Gym Challenge (as Rocket’s Zapdos), Aquapolis, EX FireRed & LeafGreen and EX Team Rocket Returns.