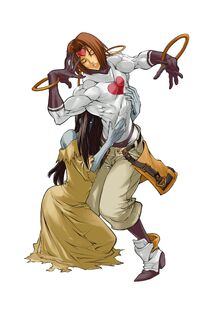 Zappa is a character in the Guilty Gear fighting game series, making his first appearance in the third game, Guilty Gear XX: The Midnight Carnival. He is said to be a normal guy from Australia, except that he is possessed by a variety of ghosts, the most prominent of which is called S-Ko.