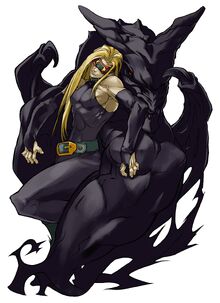 Zato-1 is a character in the Guilty Gear fighting game series, making his first appearance in Guilty Gear: The Missing Link. He is blind, but fights using a parasitic entity named Eddie, a shadow-being created using Gear technology, who eventually overcomes Zato and takes over his body. Due to the passing of his voice actor, Kaneto Shiozawa, the character is officially referred to as Eddie since Guilty Gear XX, and it is explained that "Zato" by that point is simply a lifeless body being manipulated by the creature.