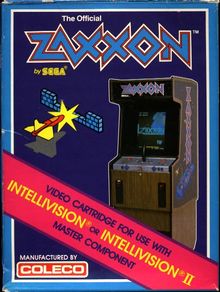 Zaxxon is a 1982 arcade game developed and released by SEGA. Some sources[1][2][3] claim that Japanese electronics company Ikegami Tsushinki also worked on the development of Zaxxon. The game gives the player the experience of flying a fighter craft through a fortress while shooting at enemy entities (missiles, enemy gunfire, etc.) The object of the game is to hit as many targets as possible without being shot down or running out of fuel—which can be replenished, paradoxically, by blowing up fuel drums.[4]

The world record on Zaxxon is 4,680,740 points scored by Vernon Kalanikaus of Lā'ie, Hawai'i, on March 15, 1982, according to the Twin Galaxies Intergalactic Scoreboard.[5]

A bootleg of the game was released in the arcades in 1982 called Jackson.[6]

The Atari 2600 and Intellivision ports were noticeably different because they used a side-scrolling perspective instead of the isometric graphics of the other versions. This is probably due to technical limitations of these consoles. The ColecoVision version, designed by Coleco staffer Lawrence Schick, was the first home version to use the isometric graphics.

Due to its success, Zaxxon spawned an arcade sequel, Super Zaxxon. It did not do as well as the original.

In 1987, Zaxxon 3-D was released for the Sega Master System. This console variation made use of its 3-D glasses add-on for extra depth perception.

Zaxxon's Motherbase 2000 was released for the Sega 32X in 1995. It is the only Zaxxon game to use full 3D graphics. The game bore the Zaxxon brand only in the United States, as the Japanese version was named Parasquad and the European version was named Motherbase.

Zaxxon was the first game reviewed on the YouTube channel Classic Game Room on February 28, 2008.

In 1987's Panther one had to rescue men and avoid enemy ships in a same isometric 3d-view game.[13]

The 2003 Retro Remakes competition produced clones for Linux and Windows.[14]