Zero Wing is a shoot 'em up that has since gained notoriety for becoming an internet meme. The meme surrounds the poor translation job on the game, featuring the often quoted line, "All your base are belong to us", as said by the villain CATS.

As with other scrolling shooters, the aim of the game is to shoot all enemies that appear on screen and avoid getting obliterated by enemy fire, crashing into enemies or into foreground scenery. There are mid-level and end-of-level boss enemies that stay with the player until they are defeated. The game features eight levels, each with different style and enemies and a few minutes long: Natols, Legrous, Pleades, Aquese, Submarine Tunnel, Barricade Zone, Bellon, Gerbarra.

The player, a "ZIG" star fighter, has several ways to attack:

Soon after starting, the player encounters power-up ships. If destroyed, they leave behind power-ups. These run in the sequence of red weapon, blue weapon, green weapon, and speed-up, and then start with red again. There is also an occasional shield power-up, which attaches to the front of the ship. Once the first weapon power-up is collected, two small ships appear above and below the ZIG, and follow its exact movements. These extra ships are impervious and can be used as shields. As they occasionally move nearer to the ZIG when blocked by large enemies or foreground scenery, they can serve as a warning to the player that they should move carefully to avoid a collision.

Each of the three main weapons has three power levels. Each time the same weapon is collected, the power level increases. If a different weapon is collected, it starts back on level 1 power, unless level 3 power was already attained previously. If a second shield power-up is obtained while one is already held, a special power-up will replace it which increase all weapons to a special, otherwise unattainable, level 4. Level 4 weapons may also be obtained by detonating an object that would yield another bomb power up while already carrying a bomb. In the intro scenes, the ZIG's windows are green. In the game itself, the windows change color depending on what weapon the player has.

After it became fairly successful in the arcades and game centers, Zero Wing was ported to the PC Engine CD-ROM by Naxat Soft exclusively in Japan and the Sega Mega Drive by Sega in Japan and Europe in 1991. The home console versions of Zero Wing were never released in North America due to the release of the arcade version distributed by Williams Electronics. However, the European Mega Drive version of the game will play on American consoles due to a lack of region protection.

In the Mega Drive version, to expand on the game's plot, Toaplan added an introductory cut scene to the game. This introductory scene was translated by Sega of Europe to English from Japanese rather poorly for the European release (a phenomenon dubbed Engrish), resulting in dialogue such as "Someone set up us the bomb", "All your base are belong to us", and "You have no chance to survive make your time". The introduction does not appear in the arcade nor PC Engine CD-ROM versions.

The Mega Drive version was not released in North America.

The gameplay was well received upon release. British magazine Mean Machines gave the Japanese version of the game a 91% score, praising the gameplay as well as the intro sequence. [1]

In more recent years, however, GameTrailers listed the Mega Drive version of Zero Wing as the seventh worst video game in its "10 Best and Worst Video Games", though the focus was on its bad translation.[1] However, in a later ScrewAttack review, it was noted the game was "not that bad". It praised its soundtrack, stating that it contains "some of the best 16-bit rock music you'll ever hear".[2]

"All your base are belong to us"[edit | edit source]

Main article: All your base are belong to us 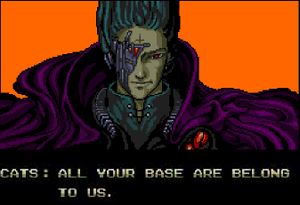 A screen shot from the introduction to Zero Wing on the Mega Drive featuring the infamous phrase, "All your base are belong to us"

In 1999, Zero Wing's introduction was re-discovered, culminating in the wildly popular "All your base are belong to us" Internet meme.[3]