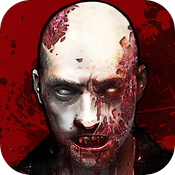 Until House of the Dead come over to the iPhone, you can indulge your zombie-killing tendencies with Zombie Crisis 3D. It plays out like an arcade light gun game; you have zero control over the movement of your hero. All you do is point and shoot. This lack of "control" doesn't upset me too much, as I have a real fondness for light gun games and Zombie Crisis 3D does a good job replicating that arcade experience. ---IGN Zombie Crisis is an intense, finger-friendly 3D rail shooting game for the iPhone/iPod Touch. Abandoning the 'traditional' joystick-based FPS, Zombie Crisis releases your fingers from the difficult movement & weapon control and delivers a new, innovative style that lets you focus on the action. In Zombie Crisis, a bio-accident has taken place at the Argo Company, turning its infected staff into bloodthirsty zombies. When the disaster is about to sweep through the States, a female mercenary soldier, Dana, receives an order to investigate the situation at Argo's lab. Will her investigation lead to a one-way street into those dangerous zombies? Or will she find something even more dangerous than the Zombie Virus? Features: 21 maps, hundreds of zombies and 4 big bosses.
4 weapons including pistol, shotgun, and machine gun and a dagger
Beautiful 3D graphics, professional sound production, and a gripping storyline.
Ready for RETINA display!