Zubat is Pokémon #41 as ordered in the National Pokédex; it is #37 in Johto and #63 in Hoenn. It evolves into Golbat at level 22, and further evolves into Crobat when completely tame or happy.

The name Zubat is probably derived from the Japanese word zubatto, the onomatopoeia for a target being successfully hit, and bat. It can also be accepted as a reference toward the tokusatsu hero Kaiketsu Zubat. A Zubat is supposedly 2' 7" tall.

It resembles a small blue and purple bat, with no eyes and two probe-like appendages for legs. There are two shiny varieties, one solid green with gray ears and wings and the other a dark grey all over. Owing to its name and appearance, it acts much like a bat. It lives in caves and other dark places, and navigates using ultrasonic waves. It appears that Zubat is weakened by sunlight, so it hides in caves or other dark places. At night, it will come out and hunt for fruit or Venomoth, or it sucks blood. The female's fangs are smaller than the male's.[1]

In an early episode of the Pokémon anime, Brock catches one of a flock of Zubat swarming out of a cave. Brock usually uses it for reconnaissance, much like Ash's Pidgeotto. It has evolved to Golbat and then into Crobat. Crobat was given to Forest, with Onix and Geodude by Brock, becoming a Gym Leader.

In Pokémon Special Zubat makes a cameo in the Red, Green & Blue chapter in Raging Rhydon as a Mt. Moon wild Pokémon. 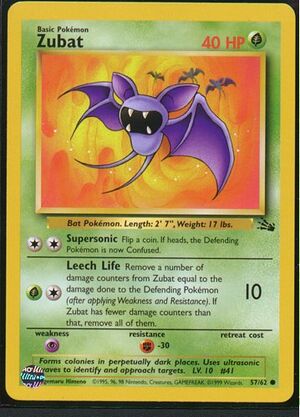 Zubat has had many card appearances.