Scyther (ストライク, Sutoraiku, Strike in original Japanese language versions) are one of the 493 fictional species of Pokémon creatures from the multi-billion-dollar Pokémon media franchise – a collection of video games, anime, manga, books, trading cards and other media created by Satoshi Tajiri.

Scyther comes from the word scythe, which refers to the scythe-like blades of its arms. "Scyther" thus sounds like "one who uses a scythe." Its English name was originally going to be Stryke, as revealed in the 1999 Nintendo Official Magazine Pokémon Special #2.

Like a real-world mantis, Scyther is green, only it has three horns on its head, its calves are thick, it has three claws on each of its feet, and the upper portions of its legs are pointy. Scyther is an omnivore. It may be diurnal or nocturnal. They are usually found in grasslands, although some have been found in large cave systems.

Scyther's most impressive feature is its blade-like arms. These arms can cut through logs, Pidgey, Weedles, (and, in the anime, metal I-beams).

Scyther is also noted for its agility. While hunting in the wild or in a battle between trainers, it relies on its speed to strike quickly and to avoid being struck in return by its foe. If angered, it can boost its agility, allowing it to quickly tear down any opponent. Its nigh-supernatural speed can make it seem to be in more than one place at once, or to seem invisible as it moves in, strikes, and leaves the opponent before he can feel the blow. For this reason, Scyther is sometimes known as "the ninja Pokémon".

Scyther's wings are capable of flight, but this is rare; it is not a fast or an agile flier, and it is a better hunter on its own feet, however it's weak flight is still enough to qualify it as flying type. It is possible Scythers lighten their feet by flapping their wings quickly while running, resulting in higher speed on foot.

Scyther's carapace can be used to camouflage itself, making it hard to see even when it is not moving. Scyther is often said to resemble a velociraptor in its appearance, although it looks and behaves like a human-size Praying Mantis and it is called the Mantis Pokémon.

Although it is the pre-evolved form of Scizor, Scyther is faster, as Scizor has its steel type components to weigh it down. Scyther is seen as one of the most frightening and more powerful first generation Pokémon. Some consider it to be more powerful than Scizor as Scyther retains its flying abilities. However, this makes it weak to fire, ice, and electric attacks, which all have very common TM's in that type. In fact, Scyther and Scizor's overall is the same, making Scyther one of 2 Pokémon that do not gain a Stat Total boost with evolution (the other being Nincada to Shedinja, who actually has LESS stat total).

In Pokémon Diamond and Pearl, male Scyther, like Scizor, are shown having shorter abdomens than females.

In Pokémon Red and Yellow, Scyther can be found in the Safari Zone. It is also available at the Game Corner. Scyther are not available in Blue. In Pokémon Gold, Silver and Crystal, they can be caught during the Bug Catching Contest. The second Gym Leader, Bugsy, also uses a Scyther. In Pokémon FireRed, which is a remake of the original Pokémon Red, Scyther can once again be caught at the Safari Zone, and are also available at the Game Corner. Other than buying one, chances of encountering Scyther are very low.

In the original generation of Pokémon games (Red, Blue and Yellow), Scyther has no evolution. However, in Pokémon Gold and Silver (and their sequels), if Scyther is traded to another player while it is holding a "Metal Coat", it evolves into Scizor. In the earlier games, evolving Scyther or teaching it TM moves is usually a wise decision, since it learns few damaging moves. In more recent installments, it has received better moves.

All Pokémon have specific statistical ratings of the qualities, such as power, speed, and vitality, which help them in battles. All ratings can be improved by certain costly items available in the game.[1] Scyther's ratings are good overall. As befitting a mantis, its Attack and Speed are very high. Special Attack is very low, and its defenses are average. Given these average defenses a simple offensive tactic may be a Scyther user's best choice. In Gold and Silver, it also learns the handy False Swipe attack at a low level, making it a perfect choice if there's a specific Pokémon to catch. Unfortunately, with the low encounter rate of Scyther, many choose to catch the easier to find Parasect, which also learns False Swipe.

In Diamond and Pearl, Scyther has become more useful. They now learn the powerful Bug-type attack X-Scissor at level 41. In addition it learns the new attack Night Slash, a Dark-type version of Slash. Through TM it can finally learn the new Flying-type healing move Roost and Giga Impact, the Physical version of Hyper Beam. In Diamond Scyther can be found on route 229. It is not available in Pearl and must be traded from diamond or be transferred from the GBA games.

A minigame in Pokémon Stadium 2 features Scyther, as well as Scizor and Pinsir. The game involves trying to time Cut attacks in order to slice falling logs in half. Points are awarded based on accuracy. Scyther can be found as a Shadow Pokémon in the final section of Pokémon XD.

Scyther also appear in Pokémon Snap on the Beach course. At two points in the course, tall grasses hide a Scyther. Throwing a Pester Ball into the grass causes Scyther to fly out, cry and flail its arms, then fly away.

Scyther first appeared in episode 42, Showdown at Dark City. In this episode (in which he appeared opposite Electabuzz), Ash, Brock, and Misty come upon a town that is threatened by sparring dojos. One dojo possesses a Scyther as its mascot, the other an Electabuzz. Throughout the course of the show, it is revealed that both Pokémon in question react strongly to certain colors, especially red. The conflict is ended when both Scyther and Electabuzz are doused in ketchup during a face off, and the result is that the two knock each other out. (In later episodes, no Scyther or Electabuzz showed the same weakness to red and this was probably just a reference to the fact that both were exclusive to the Red version of the video games at the time.)

A Scyther has also been owned by Danny of the Orange League. After Danny's Scyther helped Danny's Nidoqueen and Machoke carve the sled, it was participating in the sled race.

Later, Tracey Sketchit catches his Scyther in episode 99, "Tracey Gets Bugged". Tracey's Scyther is somewhat special - it is aged and was recently removed from its clan by a younger, stronger Scyther. The bug Pokémon reconcile their differences through the interference of Team Rocket, and Tracey's Scyther is allowed to leave with him with its conflicts fully resolved. In the episodes leading up to Tracey's separation from Ash and Misty (when he decides to stay as an aide to Professor Oak), Scyther shows fierce competition with Ash's Charizard, before it, too, leaves the main group. Tracey's Scyther is incredibly strong-willed, preferring to keep watch over the travelers while they sleep, as opposed to staying in its Pokeball.

Scyther is one of the Pokémon that were captured and cloned by Mewtwo.

Scyther has played a role in the movies Pokémon 2000, Pokémon 4Ever, the short film Pikachu's Rescue Adventure, and three television specials. Most notably, in the movie Pokémon 4Ever, Scyther was one of the pokémon used to try to capture the movie's star, Celebi. Tracey's Scyther appears one more time in an episode of Pokémon Chronicles, in which it battles Butch's Mightyena. However, Tracey recalled it because it was injured by Mightyena after doing damage to it.

Scyther was also the strongest Pokémon that belonged to Azalea Town Gym Leader Bugsy. It was beaten while using Swords Dance as it battled Ash's Cyndaquil who got airborne and blasted it with a Flamethrower attack from above.

In Pokémon Special, Scyther is the first Pokémon Green received. It has since evolved into Scizor.

Bugsy is seen with a Scyther in the Gym Leader faceoff. 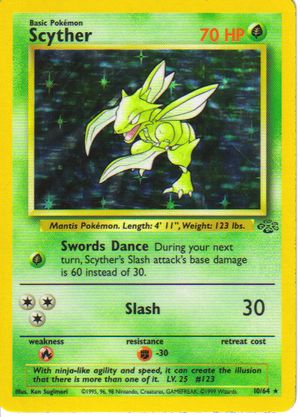 Scyther has made many appearances as a Basic Grass-type Pokémon (unless noted otherwise):

In the early days of the card game’s history, the Jungle version of Scyther was a staple in many Grass-type decks, boasting a direct Slash attack that could be doubled in power by the move Swords Dance. It was effective even against the few Pokémon resistant to grass in print at the time. It was also popular because of the ability to use colorless energy and the free retreat cost.