Super Castlevania IV​ is a platform game developed and published by Konami and the first Castlevania game for the Super Nintendo Entertainment System. The game was originally released in 1991 and later re-released on the Nintendo Wii's Virtual Console in 2006. While Super Castlevania IV features the same plot and premise of the first Castlevania on the NES, it also has new eleven stages, five of which take place outside of Dracula's castle, expanded play control, 16-bit graphics featuring SNES Mode 7 and a soundtrack featuring brand new pieces and remixes based on previous Castlevania songs.

The control scheme has been expanded upon from its predecessors. This includes the ability for the main character, Simon Belmont, to whip in eight directions. Additionally, Simon can also keep his whip held out. Players can get Simon to hold out his whip by holding the attack button. This feature allows Simon to swing his whip around and in effect, more easily block enemy projectiles or rapidly hit enemies with minor damage. Lastly, Simon can also latch his whip onto grappling points, letting him swing over various obstacles.

In comparison to its predecessors, Simon's ability to jump has also been expanded on. To a limited extent, Simon can now be controlled in the air. This opens up the possibility to dodge and maneuver away from danger. Simon can also climb stairs in mid-jump, as well as crouch while moving forward.

Like most Castlevania games, Simon can utilize sub-weapons and whip power-ups. Sub-weapons are powered by hearts found in candles and slain enemies. Specifically, these sub-weapons include a dagger, cross-like boomerang, ax, holy water and pocket watch. Notably, the more powerful sub-weapons, such as the watch, require more hearts to use. Since the control pad is used to aim the whip, another button is used to attack with sub weapons, rather than pressing up and the attack button. On the other hand, whip power-ups, which increase the strength and length of the whip, are automatic, usually found in candles and are not regulated by hearts.

Following the model set by the previous games, Super Castlevania IV employs the usage of many the series' recurring elements, such as moving platforms, pits with spikes, and stairs that one can traverse by pressing the Up or Down direction on the D-Pad.

Unique to Super Castlevania IV's level design is its connection with Simon's whip, the Vampire Killer whip. Occasionally, objects similar to door knockers will appear in the player's view, and the player must use Simon's whip to grab onto them and swing across pits to gain access to the next part of the stage. Simon is also able to adjust the length of the whip while swinging if the player uses the D-pad accordingly.

The game took advantage of the SNES's then state-of-the-art technology to create levels which would have been impossible to render in the 8-bit NES version of the game; one level involves the player running across stationary blocks in the center of a giant, rotating, cylindrical room, while another involves the player being made to jump from platforms suspended from a pseudo-3D chandelier while the screen slowly flashes red and black.

Like previous entries in the series, the game's bestiary shows inspiration from American horror movies, Eastern European folklore and Greek mythology. Many of the more powerful monsters are reproductions of the Universal Monsters, with Boris Karloff's depictions of Frankenstein's Monster and The Mummy serving as the bosses in two of the game's later levels. Some of the other monsters culled from classical depiction include Medusa, The Grim Reaper and a Golem.

The American and European localizations of the game contain some differences from the original Japanese version, which like most games in the series, is called Akumajō Dracula.

In the Japanese version of the game, there were crosses on top of some of the tombstones in the introduction. This was removed for the American and PAL localizations to avoid religious controversies. The misspelled name "Dracura" (a case of Engrish) is also clearly written (in Roman letters) on the tombstone in the Japanese version; this was replaced with an unreadable smudge in the Western versions.

As with many games on the Super NES, there were censorship issues as well. The statues in stage 6, which were originally topless, were redrawn wearing tunics. Blood dripping from the ceilings as well as pools of blood in stage 8 were re-colored from red to green, effectively turning it into slime or acid, and blood dripped from the opening logo in the Japanese version of the game which resembled the original Akumajō Dracula title screen from the Famicom Disk System.

Aside from Nintendo Power, in 1994, the game was reviewed by Sandy Petersen in Dragon #209's "Eye of the Monitor" column. Petersen gave the game 3 out of 5 stars. 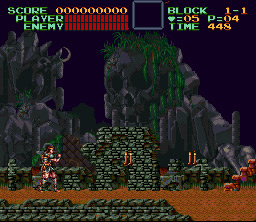 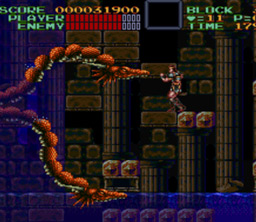